A Designer's Tricks: Why those Numbers?

Hello!
Today I'm going to talk about how I designed the economy numbers for Perish Alive, a  real-time strategy resource management game made for Ludum Dare :) I had to figure out: How much does a room cost? How much do upgrades cost? How much resource do we generate?

I used affective-state design methodology. I started from "What do I want my player to feel?" and then designed the numbers to create that experience.

To begin with I asked the team 2 important questions.

The team wanted a High-paced 10mins game where the goal was to build all rooms. Since we only finished 30% of the game, I designed it for 3 minutes instead. With a clear goal in mind, I reverse engineered this goal to get the numbers.

I reverse engineered existing games into a spreadsheet. Taking note of the emotions evoked within me (Affective States), gateway resources, balancing loops, and progression curves. I choose to research successful idle games such as A Dark Room and Paperclips. I figured these idle games would be ideal references because there was no fancy art or features, so their system and progression design had to be solid.

Spreadsheet Analysis of "A Dark Room" during the Game Jam

The user story is a diary written from the player's point of view. Their thoughts as they play the game. This is time-stamped down to the seconds as I design minute-to-minute gameplay. Here's a first draft example (assuming 1 resource every 5 seconds): 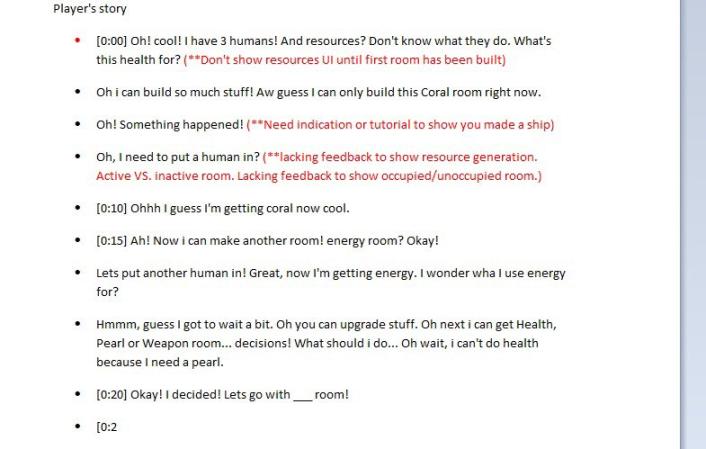 Player's story for the first 20 seconds of gameplay

Once I had the player story down, it was relatively easy to create all the numbers, and I knew what emotive state I was trying to craft. Using a spreadsheet meant I could keep an eye on the big picture.

The last step is to implement, play test and refine to achieve the desired effect. If they didn't, I changed the numbers - not the player story. The overall vision stays fixed, and hence player story doesn't change. This way, the entire team is working towards a common goal and experience and can execute it the best way they know how - design, code, art, sound. :)))

And that's it! My 5-step process to designing the numbers!

The actual numbers in the game are completely different from the spreadsheet! xDDDD But because I had a reason behind every single number, it was easier to see which numbers needed to be tweaked when something felt off.

It's worth noting that I don't share information from all steps with my team, only Step 2. Because the rest of it is information overload. Here's an example of it in action during the actual development, where were were discussing introducing an enemy before and after 20 seconds would have huge differences:

Thanks for reading! If you have any questions, tips, or just want to chat I'd love to hear them! I'm still learning myself. :DDD

One whale's success is another's failure

Interesting read, always lovely to read the process behind it.

Thanks for reading! xD I didn't really expect anyone to read through everything haha ^^

You're welcome. I am always intrigued about how games were done, so had to read it. :)